Is Nervousness Limiting Your Career? 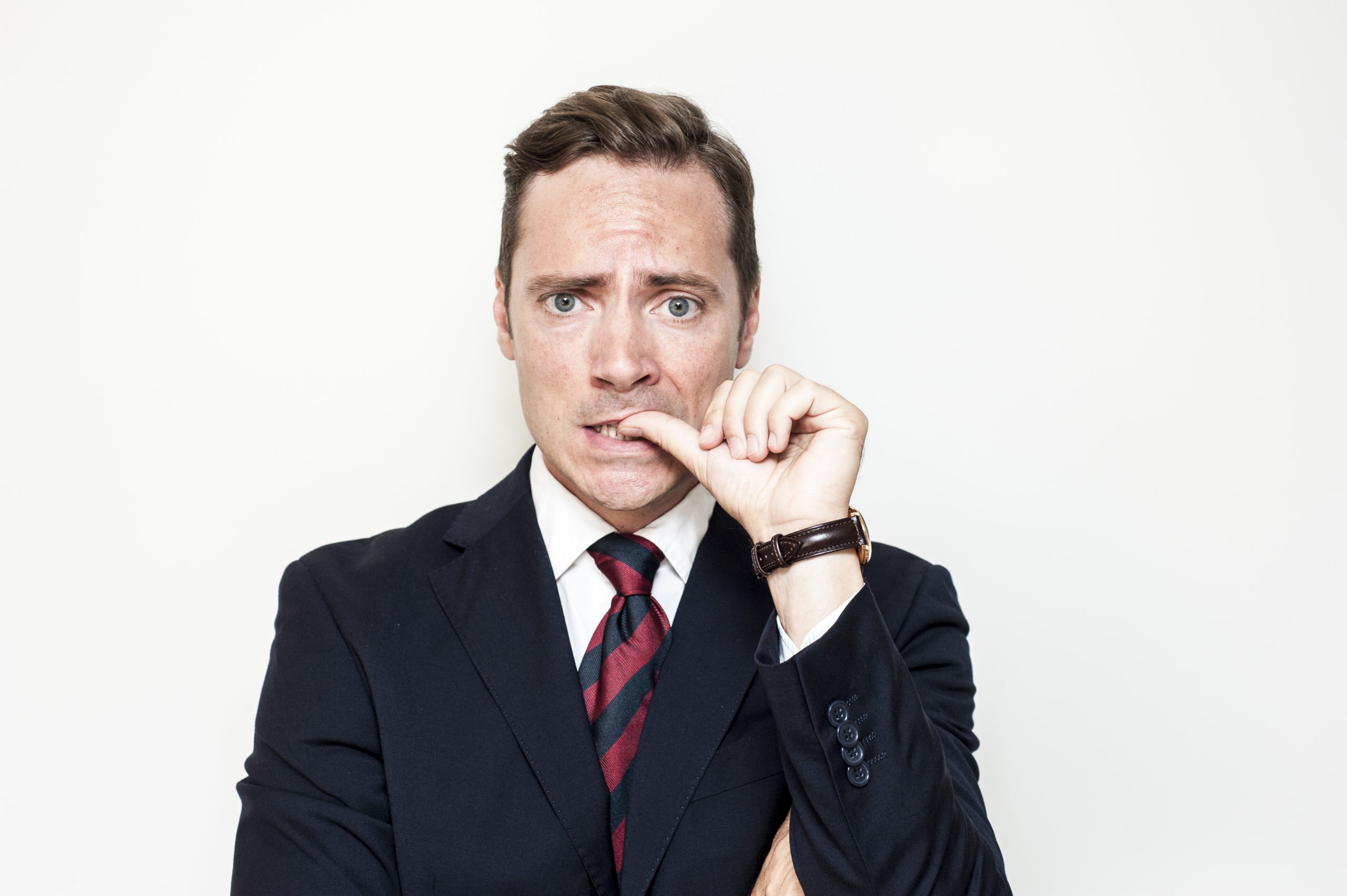 For some business presenters, nervousness is a temporary condition. When they’ve moved past the first few minutes, their nerves seem to float away.

For other presenters, nervousness is long-lasting and debilitating. It never goes away, even when the presentation is going well. We’ve heard this described as having an out-of-body experience or experiencing an eleven on a nervousness scale of one to ten. Others describe it as a screeching in their heads or swirling the drain.

Regardless of how you might describe it, it’s unpleasant. If you suffer from that kind of presentation nervousness, and if presenting is a regular part of your job, it can make having that job a miserable situation.

I know this to be true because I was there once.

Back Story – Performers and Nervousness

I started my career as a stage actor. For a few years in my 20s, I toured internationally on a few shows.

Nervousness had always been a passing thing for me. Sure, there were opening-night jitters and the occasional pre-show butterflies, but nothing I couldn’t handle as soon as I walked on stage.

The problem started for me about a year into the run of one of the touring shows. I got lazy. This is something that many actors can relate to. When you’ve been doing the same role for a long time, you know it by heart, and you no longer need to think about what you’re doing. In the theatre world, it’s referred to as “phoning it in.” To be clear, actors SHOULD think about what they’re doing, but my laziness kicked in, and I’d find myself onstage not knowing quite where I was in the show. It was as if I had been flying along on autopilot, and suddenly the autopilot turned off. And there I was, suddenly awake on stage, feeling out of sorts and trying to figure out where I was so that I could land the plane. If you’ve ever been driving and realize you don’t remember the last few miles, you know the feeling.

For me, being on stage was suddenly paralyzing. My mind would race; my heart felt as if it would jump out of my throat. And what was worse, I was letting down my fellow castmates.

As the weeks churned on, it happened repeatedly; then it started happening backstage. The fear of forgetting my lines would stop me in my tracks as I awaited each entrance. Nothing I did would make it go away. So, I quit the show and eventually quit acting altogether.

Nervousness Can Be Career-limiting

My nervousness was career-limiting. As it happened, I was in good company. Barbra Streisand panicked during a 1967 performance in Central Park. Because of that, she avoided live performances for decades. In a piece by CBS News, she said, “I couldn’t come out of it… It was shocking to me to forget the words… I didn’t have any sense of humor about it… I didn’t sing and charge people for 27 years because of that night… I was like, ‘God, I don’t know. What if I forget the words again?'”

A businesswoman in her mid-30s, we’ll call her Ann, whom I worked with recently experienced something similar. She was attending one of our presentation skills training workshops because it was part of a larger training initiative that she and her peers were involved in. Ann confessed to me during a coaching session that she felt as if she was in a hostage situation having to take the class.

When I asked what nervousness felt like to her, she said that it’s like her head is under water and she can’t breathe. “Crazy nervousness,” she said. What’s interesting is that her outward appearance was calm and poised. The only indication of nervousness that I noticed was that she teared up a little when she was in front of her classmates; otherwise, she looked as if she was in complete control.

In private, she told me stories of being so nervous during presentations that she had thrown up in her mouth and had to swallow it before continuing. She described other instances as having blacked out and having no control over her body or her words. She said that she goes into “panic mode” sitting in meetings before having to get up and present, which, of course, made her situation worse.

To deal with her fear, she’d learned several coping mechanisms over the years. These ranged from spending the hour before a presentation in the bathroom and moving meetings into smaller rooms so she wouldn’t have to stand up. And then there was the time she rescheduled a meeting for a time when her manager and other superiors weren’t available to attend.

When I asked her whether she’d like to move up in the organization, she said, “No, I’d prefer to move down so that I don’t have to put myself in that position again.”

So, here we are, Barbra Streisand, Ann, and me. All of us limiting our careers because of nervousness and the fear of failure. Barbara turned down money from live performances, I changed careers (thankfully), and Ann wanted a demotion.

The good news is that Barbra worked through her fear, and now she performs regularly in front of thousands. I speak for a living in front of varying-size groups, and Ann can learn to manage her nervousness too. She just needs the right coaching and some positive experiences so that her fear of failure can be replaced by better memories associated with her success.

The bad news is that there’s no one-size-fits-all tool for dealing with presentation nerves. The solution for each person is unique and requires a gentle touch from a manager, communication coach, or mentor.

The class that Ann attended was a baseline program designed for moderately nervous and novice presenters. Ann’s issues went beyond the scope of that program, but we did make some progress. Through our coaching sessions, we discovered that her nervousness was connected to her dislike of being the center of attention. It had very little to do with the content. In fact, she described herself as an expert. Knowing her nervousness trigger was a good start.

Secondly, Ann was equating speeches and meetings. They’re two very different things. At one point, I mentioned that she seemed to be a good conversationalist, and she agreed, as long as conversations took place in intimate settings. However, she had never considered that a business meeting has more in common with a conversation than it does with a speech. “You’re rewiring my brain,” she said. That’s an important insight because learning new skills often requires unlearning old ones.

If Ann and I had had more time together, she could have started stacking up some positive experiences that would ultimately lead to her ability to manage her nerves better. And who knows, maybe she’d even start to imagine herself getting a promotion instead of the demotion she had been hoping for.

Have you overcome your fear of presenting, performing, or public speaking? If so, we’d love to hear about it.

Do you have a team that could benefit from learning to manage their nervousness? We’d love to help. Contact us to learn how we could do that.